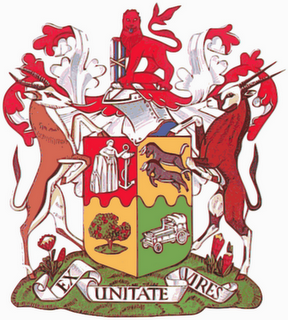 On 31st May 1910 the Union of South Africa came into existence.

In the aftermath of the Anglo-Boer War (1899-1902), Britain annexed the South African Republic and the Orange Free State, two hitherto independent Afrikaner Republics, and renamed them the Transvaal Colony and the Orange River Colony respectively. They were added to Britain's existing South African territories, the Cape Colony and Colony of Natal.

The Union of these British Colonies was the result of nine years of negotiations and represented a great victory for peacemaking following the destructive and bitter war. This Union was created by the passage of The South Africa Act of 1909 by the British Parliament. A bicameral parliament was created, consisting of a House of Assembly and Senate, and its members were elected mostly by the country's white minority.

This was again replaced by the Constitution of the Republic of South Africa Act (1983) in which a tricameral Paliament was constituted, essentially done to give the Indian and Coloured (mixed race) population the vote. The Black population were to exercise their vote through independent Black States created on a tribal basis.

Following the unbanning of the ANC and the PAC, and the release of Nelson Mandela in 1990, in a referendum held on March 17, 1992 the white electorate voted 68% in favour of dismantling apartheid through negotiations.

After protracted negotiations under the auspices of the Convention for a Democratic South Africa (CODESA), a draft contitution appeared on 26 July 1993, containing concessions towards all sides: a federal system of regional legislaturs, equal voting-rights regardless of race, and a bicameral legislature. In April 1994 the South African population voted in the first universal sufferage general election.

In 1996, after considerable debate, and following submissions from advocacy groups, individuals and ordinary citizens, the Parliament enacted a new Constitution and a Bill of Rights.